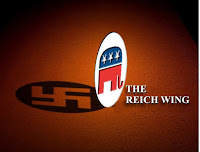 Nazi is not new to the Republican Party.

Some day they will come for you.

Dalrymple’s State of Emergency enabled North Dakota law enforcement, specifically the Morton County Sheriff’s Department assisted by the state’s Department of Emergency Services, to take advantage of a program passed 20 years ago under the Bill Clinton presidency, the Emergency Management Assistance Compact (each participating state has a corresponding implementation statute).


“The Emergency Management Assistance Compact (EMAC) authorized states to enter into agreements with other states in order to share emergency management–related personnel during crisis situations. One of the only other times this compact was deployed outside of a natural disaster was for the Black Lives Matter protests in Baltimore after the death of Freddie Gray…According to a history of EMAC published in September 2014, the compact centers around empowering states to respond to massive hurricanes, and in particular, Hurricane Andrew, which caused nearly $25 billion in damages when it hit Florida and Louisiana in 1992…More recently, states used EMAC to work together during both Hurricane Sandy in 2012 and Hurricane Matthew in 2016.  All 50 states, plus the District of Columbia, Puerto Rico, Guam, and the U.S. Virgin Islands, participate in EMAC. With language mostly centering around natural disaster relief, the congressional joint resolution creating EMAC also notes it exists to help manage things like “community disorders, insurgency, or [an] enemy attack.” – DeSmogBlog, This Natural Disaster Assistance Law is Why Other States Are Policing Dakota Access Pipeline Protests


Wisconsin was one nearby state that sent officers from several departments. An “EMAC Response After-Action Report“ created by the Wisconsin State Patrol (WSP), acquired by Melissa Hill through a records request made using Muckrock.com, shows some details of their deployment.


The report states that Wisconsin provided a “mobile field force” of 17 state troopers, with additional personnel from the Dane, St. Croix, Marathon, and Rock County Sheriff’s Departments, in a detail lasting from October 9 until October 15, 2016. Two Wisconsin state troopers also served as a “Force Protection Team“, also called the “Less Lethal team“, on October 10 (Indigenous People’s Day/Columbus Day) when 27 people were arrested on or near a DAPL work site in Morton County, ND.


Among those arrested on October 10 was Rebecca Kemble, a Madison, Wisconsin alderwoman, who was present acting as a legal observer. Madison attorney Patricia Hammel, was also present in Morton County on October 10 but was not arrested. Hammel told the Wisconsin’s Isthmus what she observed after water protectors began their prayer ceremony at the pipeline site:


“Within an hour, about 50 law enforcement officers arrived and came marching up the highway…I was amazed to see that most of them were from Wisconsin.” – Patricia Hammel,

An art academy classmate of mine settled on a career with the CIA. They recruited creatives.

I met the people who owned the Havana TV station that broadcasted Jack Parr’s interview with Castro from the Havana Hilton just after the Cuban Revolution. Their TV station was nationalized by Castro, they lost everything. They settled in central Pennsylvania.


"Knowing his fascination for scuba-diving off the coast of Cuba, the CIA at one time invested in a large volume of Caribbean molluscs. The idea was to find a shell big enough to contain a lethal quantity of explosives, which would then be painted in colours lurid and bright enough to attract Castro's attention when he was underwater. Documents released under the Clinton administration confirm that this plan was considered but, like many others, did not make it far from the drawing-board. Another aborted plot related to Castro's underwater activities was for a diving-suit to be prepared for him that would be infected with a fungus that would cause a chronic and debilitating skin disease."


The CIA looked for creative people. My friend from art school said he steamed open envelopes but I guessed he did more than that.

They might have tried paranormal stuff to get Castro:

Posted by James Pitcherella at 10:49 AM No comments: Links to this post

I probably saw him, but I have no memory of a man nicknamed “The Kaiser”, a Coatesville resident who sided with Germany in World War II.

There were many Pennsylvanians who sided with Germany. Pennsylvania’s landscape is indistinguishable from German landscape. Germans feel at home here.

Nazi Germany will win the war on January 20, 2017 when Heir Trump is inaugurated as President of the United States.

“Band of Brothers is a 2001 American war drama miniseries based on historian Stephen E. Ambrose's 1993 non-fiction book of the same name…


The series dramatizes the history of "Easy" Company (part of the 506th Parachute Infantry Regiment, 101st Airborne Division) from jump training in the United States through its participation in major actions in Europe, and up until Japan's capitulation and war's end.”

Volksdeutsche "Germans in terms of people or race", living in the United States answered Hitler’s call to return to Germany and fight for the Deutschland. They needn’t have left.
The parents of the German POW depicted in the scene from “Band of Brothers” could have registered as Republicans and bided their time until Donald Trump would bring Hitler’s Nazi dream to the most powerful nation on earth.

“The scene where Don Malarkey meets the German PW from Oregon did happen on D-Day although it isn't mentioned in Ambrose's book. The screenwriters learned of it from talking to Don and decided to put it in the film. But it had to be married to a more dramatic event to be allowed in, so it was made part of the scene in which Lt Speirs offers cigarettes to the same group of prisoners before gunning them down. Lumping the Malarkey story to the Speirs cigarette incident brought home the impact of the killings by making them more personal to the viewer.


Donald Trump has a book of Hitler quotations at his bedside table. He might use Hitler’s “Appeal to the Nation’ in January 1933, the turning of Germany from the democratic Weimar Republic to the fascist Third Reich” as his inaugural address on January 20, 2017.

“Eight years have passed since that unhappy day when the American people, blinded by promises made, forgot the highest values of our past, of American exceptionalism, of its honor and its freedom, and lost everything.


Since those days of treason, when a foreign-born citizen was sworn into this office, the Almighty has withdrawn his blessing from our nation. Discord and hatred have moved in. Filled with the deepest distress, millions of the best American men and women from all walks of life see the unity of the nation disintegrating in a welter of egoistical political opinions, economic interests, and ideological conflicts.


As so often in our history, America today presents a picture of heartbreaking disunity. We did not receive the equality and fraternity which was promised us; instead we lost our freedom. The breakdown of the unity of mind and will of our nation at home was followed by the collapse of its political position abroad.
In the appalling fate that has dogged us since 9/11 and has been made worse by the weakness of both my predecessor’s administration and the Congress, we see only the consequence of our inward collapse. But the rest of the world is no less shaken by great crises. The historical balance of power, which at one time contributed not a little to the understanding of the necessity for solidarity among the nations, with all the economic advantages resulting therefrom, has been destroyed.


The misery of our people is terrible! Our industrial workers have become unemployed in the millions, while the whole middle and working class have been made paupers. If the American farmer also is involved in this collapse we will be faced with a catastrophe of vast proportions. For in that case, there will collapse not only a nation, but also a 2000-year-old inheritance of the highest works of human culture and civilization.”


NOTE: This speech is a re-rendering of Adolf Hitler’s radio “Appeal to the Nation” in January, 1933, the turning of Germany from the democratic Weimar Republic to the fascist Third Reich.Except for substitutions of ‘American’, ‘America’, and ‘the United States of America’ for the original script’s ‘German’ and ‘Germany’, and several deletions and additions to move the speech to the U.S.A in the year 2017, the speech is a word-for-word English translation of Hitler’s address>


Posted by James Pitcherella at 12:56 PM No comments: Links to this post