(After all, if you’re a servicer on a loan you guarantee, you might as well just let the loan default, and then you get to do the highly lucrative work of collecting it.)


‘The most important thing to remember’ about the federal student loan program, he said, ‘is borrowers are not the customer. Borrowers are the product.”

“ Even before it created FedLoan, there was plenty of reason to believe that PHEAA’s priorities were askew. In 2007, investigations by news outlets, including the Patriot-News, based near PHEAA’s Harrisburg headquarters, revealed the agency had given out $2.5 million in bonuses to executives that year and had spent almost $1 million between 2000 and 2005 on board retreats that included $150 cigars and falconry lessons. Then-CEO Richard Willey made nearly $500,000 in 2007: His $181,000 bonus that year was more than the governor’s salary. Amid this criticism, Willey resigned.

That same year, PHEAA was sued by Jon Oberg, a former Education Department researcher who accused it and eight other state and nonprofit lenders and guarantee entities of intentionally overcharging the government. In PHEAA’s case, this allegedly amounted to $116.5 million between 2002 and 2006. All the agencies were caught up in the scandal, a former Education Department official who asked not to be named told me, but PHEAA was “particularly bad.” In December 2017, PHEAA was acquitted of defrauding the department; the verdict is on appeal. (The others named in the suit settled or had their cases dismissed.)”

The Incredible, Rage-Inducing Inside Story of America’s Student Debt Machine
Why is the nation’s flagship loan forgiveness program failing the people it’s supposed to help?

Posted by James Pitcherella at 10:49 AM No comments:

Beto O'Rourke on NFL Players Kneeling During the National Anthem

"O’Rourke, who is challenging Republican Senator Ted Cruz in Texas, talked in his lengthy response about Rep. John Lewis (D-Ga.) and other American activists whose past protests raised awareness and prompted change. “Non-violently, peacefully, while the eyes of this country are watching these games, they take a knee to bring our attention and our focus to this problem to ensure that we fix it,”

O’Rourke said of the players. “That is why they are doing it. And I can think of nothing more American than to peacefully stand up, or take a knee, for your rights, any time, anywhere, in any place.”"

The Redevelopment of Coatesville began long ago. I believe the “Retail Market Analysis by the Gibbs Planning Group, Inc.” is no longer available on their site. So here is my copy: 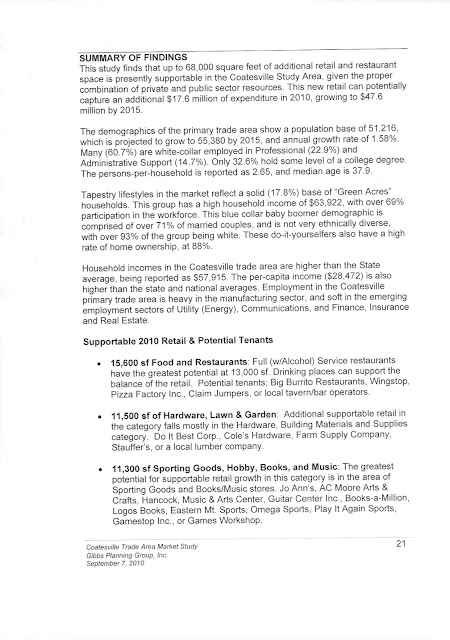 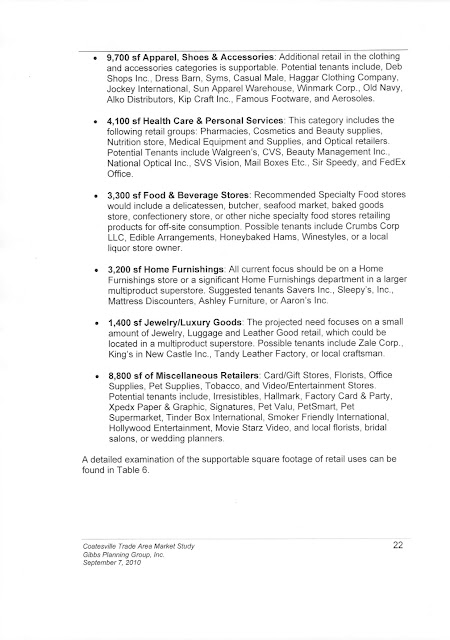 Mr. Gibbs spoke at one of Senator Andy Dinniman’s Train Station Meetings at the Methodist Church in August of 2010. Sorry for the terrible quality of the recording:

Posted by James Pitcherella at 2:18 PM No comments:

REALIGNMENT OF INTERSECTION OF LINCOLN HIGHWAY AND 1ST AVENUE

The intersection of 1st Avenue and Lincoln Highway is slated for construction to begin at the end of August -begining of September 2018. They’re going to realign the intersection to make it more pedestrian friendly and easier to navigate from a vehicular perspective. Construction will take place over the winter and be completed in the Spring of 2019.

Gateway Projects construction is probably slated for Spring of 2019. He is still working on the financing package.

We are working with city engineers to design a new streetscape for Lincoln Highway from 1st Avenue to hopefully 4th Avenue but probably 3rd Avenue. That will include sidewalk trees. We’re hoping that construction will commence next year.

The Department of Community Development has awarded us funds to make some improvements to the historic train station building. We’re going to clean that up. Put some fo window panels on it as we finish 3rd Avenue.

We’ve also received some funds from the Department of Community Development at Chester County to extend the streetscape improvements south on 3rd Avenue. Now with the new city hall we’ll have a new streetscape on 3rd Avenue from Fleetwood Street to Harmony Street.

Third Avenue will be completed this year, 4th next year and we are still working with PENDOT on the design of the platform. Not an if. It’s a when.

There is a proposal for a multi-use sports facility. This is a multi-sport indoor and outdoor field and court that would attract sporting competition. Volley ball, basketball, cheerleading from all over the Mid-Atlantic. Right now it’s in negotiation for the land and the Redevelopment Authority which owns the Flats.


The city is proposing an amphitheater for Gateway Park at the intersection of Lincoln Highway and 1st Avenue.

Below is Sonia Huntzinger, John Pawlowski and Regina Lewis: 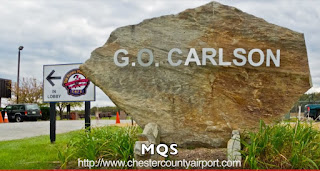 G.O. Carlson Airport is just outside of Coatesville.

OWNED AND OPERATED BY THE CHESTER COUNTY AREA AIRPORT AUTHORITY

Posted by James Pitcherella at 6:13 PM No comments:

I asked for protection. I was told “We won’t let anything happen to you.” I worked with an intelligence officer.

I sent a message that I was coming out of the now Jefferson Station on my way to the PA Eastern District Courthouse. She wrote back “I know.”


That was back in 2008.  Before the massive Russian cyber attacks.

“My” intelligence officer connection went dark on the day Jeff Sessions took office as Attorney General. But I’m sure the links to me are still in effect.

What’s different now is I think not only US intelligence knows were I am all the time. I think Russian intelligence has the same information.

Posted by James Pitcherella at 12:04 PM No comments:

It’s as fascinating as the Sicilian Godfather stuff.

The Evolution of Donald Trump and the Mob from Cit Journo on Vimeo.


Posted by James Pitcherella at 3:31 PM No comments: