Most citizens of Coatesville don't even realize they have been victims in a John Birch Society/White Nationalist experiment.

You don't need to go to Idaho to find White Separatist Militia types.  You don't have to go outside of Chester County.

Chester County has it's share of right wing extremist gun nuts. I believe they descended on the City of Coatesville in full force during the Saha property rights vs. Community Rights thing. Now the same kinds of people have descended on Washington, DC.

I saw and heard it before. The Sahas and their managers had no way of knowing my history of following and researching local right wing extremists in Montgomery County.

The City of Coatesville was in a property rights fight.


"Sellers sought (Larry) Pratt’s support because of his expertise on gun issues."

Republican office holders and Democratic office holders supported Saha "Save our Farm" people as though they were victims of an overreaching government. They could not understand they were supporting white supremacy and drug traffickers.

They didn't understand their support for the Sahas was also support for continuing Coatesville as a drug depot and preventing the redevelopment of Coatesville.

Now that Mexican cartels and their "heroin lab to your doorstep delivery system" has taken the drug business from Chester County players, Republicans are supporting the redevelopment of Coatesville. But that's another very long story.

The racism of most of the white population of Chester County allowed drug traffickers and John Birch Society white nationalists to take over the City of Coatesville. Our city burned and bullets flew because of them.

Right now Donald Trump owns Pennsylvania. But it's increasingly a four way race and unpredictable.
Posted by James Pitcherella at 1:12 PM No comments: Links to this post

On Election Day Nov. 2008 I was chair of the Democratic Committee of Coatesville, PA.

A man hired by Rep. Tim Hennessey was passing out handbills aimed at Democrats that said something like vote straight for Democrat for Obama and then fill in the oval for Tim Hennessey. Hennessey is a Republican and the people passing out the fliers for him were not received well by the mostly Democratic voters waiting in line.

The man passing out the handbills was overwhelmingly rejected. He appeared inebriated and increasingly belligerent. He began to push the handbills hard into voter’s chests. Several fistfights nearly broke out.

The normal procedure when something like this occurs in Chester County is to call on the State Constable who was elected by the voters of Coatesville’s First Ward. The Constable is the only officer legally enabled to enforce order at a polling place in Chester County.

But nobody ran for State Constable in Coatesville’s First Ward and there was no Constable available.

I was called over to try to restore order. I saw in person what was happening. I drove to Coatesville’s Fourth Ward where there was a State Constable, who at the time was the only State Constable in the City of Coatesville.

The State Constable gave me his phone to call the Coatesville Police and then got on the line to tell police he gave them jurisdiction to do what was needed to restore order to the Fourth Ward Polls.

When I came back to the Fourth Ward Polls a man working for the Obama Campaign had artfully persuaded Hennessey’s drunk and disorderly paid campaign worker to be respectful of voters.

When the Coatesville PD officer came by we waved him off.

The man quietly handed out his handbills the rest of the evening without incident.

The people working for the Obama campaign were top-notch campaign workers. They were truly impressive.

Working at the local level to elect Barack Obama in Coatesville was an uplifting experience.


I don’t think the 2016 elections will be uplifting.

It’s very clear to me that Democratic Committee-people in Chester County and probably all over America are driven to support Clinton mostly out of fear of retribution.

I’ve run across a few Trump hat-wearing people talking up Trump on the street and inside stores but I think they are volunteers maybe working for Trump on their own.

I don’t know if the Trump Pence Campaign will have a paid staff on the ground in Pennsylvania.

I think the Republican Party has a mixed view of Trump. Some Republicans will even support Hillary Clinton.

I believe the Chester County Republican Committee will have people working for down ballot Republicans. They may antagonistic towards Trump supporting Republicans.

I believe some local Republicans are more extremist than Donald Trump. They will be out supporting Trump.

I think it’s going to be a rough election for poll workers this year.

Posted by James Pitcherella at 4:39 PM No comments: Links to this post 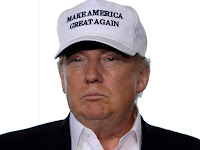 
I believe that Republicans have elected a fascist to run in November. We had candidates leaning to fascism in the 1930s but no actual fascist candidates ever won Republican primaries for president.

'Fascists believe that liberal democracy is obsolete, and they regard the complete mobilization of society under a totalitarian one-party state as necessary to prepare a nation for armed conflict and to respond effectively to economic difficulties.[7] Such a state is led by a strong leader—such as adictator and a martial government composed of the members of the governing fascist party—to forge national unity and maintain a stable and orderly society.[7] Fascism rejects assertions that violence is automatically negative in nature, and views political violence, war, and imperialism as means that can achieve national rejuvenation.[8][9][10][11] Fascists advocate a mixed economy, with the principal goal of achieving autarky through protectionist and interventionist economic policies.[12]'

So Donald Trump is 1st. fascist.


Peter Thiel spoke at Trump’s Republican Coronation. He spoke about gay rights but he looks fascist to me:

“There is a darker element in his thinking today. In an essay written in 2009 for the Cato Institute, a libertarian think-tank, he declared that he no longer believed that “freedom and democracy are compatible”, putting some of the blame for growing statism on the rise of welfare dependency and the enfranchisement of women. He added a grandiloquent coda: “The fate of our world may depend on the effort of a single person who builds or propagates the machinery of freedom that makes the world safe for capitalism”. In a book, “Zero to One”, published in 2014, he pooh-poohed competition and celebrated the power of “creative monopolists” who add “entirely new categories of abundance to the world”. He is now not so much a libertarian as a corporate Nietzschean, who believes in the power of gifted entrepreneurs to change the world through the sheer force of will and intellect.”

The evolution of Mr Thiel


I dono, maybe we're slowly sliding into fascism anyway. We have the militaristic part down. We have the surveillance of our citizens down. Our representatives represent whoever pays them the most. The same people run big business and big news media.

Maybe Trump is only putting wheels on our slide into fascism.
Posted by James Pitcherella at 7:11 PM No comments: Links to this post