The demolition phase for the site preparation of the Coatesville Train Station appears to be nearly done: 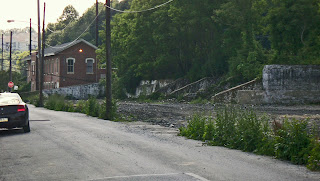 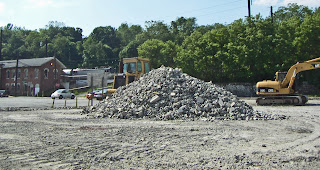 It looks like the Coatesville Train Station is proceeding on schedule.

"It is currently anticipated that the new station will be in service sometime in 2015."

John Boehner could have said that.

“The Godfather” was fairly accurate. Mafia families did complain bitterly about FBI profiling.

By the way I don’t think there is anything to stop the Genovese crime family or any Mafia organization from forming a 501(c)(4) to influence elections. And it would be tax-exempt.

As it stands the 501 (C) (4) political organizations are a huge invitation for political corruption. And Boehner is backing them.
Posted by James Pitcherella at 11:08 AM No comments:

Across Coatesville Democratic voter turnout was 5.785%

In Coatesville, Republicans are well past endangered and are on the list for extinction within a decade, they don’t matter.

Most voters are every four years voters. They vote for the President. That’s nice but national elections are only important nationally. The really important elections, the elections that affect people’s lives directly, are local elections.

We can do better than a 5.785% Democratic voter turnout.


UNOFFICIAL ELECTION RESULTS FOR COATESVILLE:
Posted by James Pitcherella at 10:30 AM 1 comment:

Why did Pat Sellers giggle when he talked about Patsy Ray winning the election?


Pat Sellers campaigned for Patsy Ray.  Pat giggled when he said "I never thought she could win."

When Patsy Ray was elected to Coatesville City Council I think that Pat Sellers got the black city council of  his dreams.


Why would someone who reads the American Renaissance (July 2000, scroll down to see 1st comment) help to elect Patsy Ray? Warning have a barf bag handy if you read the rest of the issue.


Jared Taylor:
"Blacks and whites are different. When blacks are left entirely to their own devices, Western civilization — any kind of civilization — disappears."
— American Renaissance, 2005


I just don’t want to see any more City Council members that see nothing wrong with dealing drugs.

Posted by James Pitcherella at 10:02 AM No comments:


Pat Sellers in his 2010 run for PA's 6th Congressional District


I believe that more than any single person Pat Sellers is responsible for the election of Coatesville's "Bloc of Four" City Council.  In his 1996 run for Congress the Lancaster Intelligencer Journal (https://www.box.com/shared/9a8aborcl4 ) reported that Pat Sellers “sought Pratt’s support because of his expertise on gun issues”.
Pratt's book "Armed People Victorious". Is based in part on his experience with "death squads" in Guatemala. "Armed People Victorious" is the "bible" of the American Militia movement.

Larry Pratt, a gun rights absolutist whose Gun Owners of America (GOA) has been described as "eight lanes to the right" of the National Rifle Association, may well be the person who brought the concept of citizen militias to the radical right.

In 1990, Pratt wrote a book, Armed People Victorious, based on his study of "citizen defense patrols" used in Guatemala and the Philippines against Communist rebels — patrols that came to be known as death squads for their murderous brutality.

Picturing these groups in rosy terms, Pratt advocated similar militias in the United States — an idea that finally caught on when he was invited for a meeting of 160 extremists, including many famous white supremacists, in 1992.

It was at that meeting, hosted in Colorado by white supremacist minister Pete Peters, that the contours of the militia movement were laid out...

Former Leader of Guatemala Is Guilty of GenocideAgainst Mayan Group
"GUATEMALA CITY — A Guatemalan court on Friday found Gen. Efraín Ríos Montt, the former dictator who ruled Guatemala during one of the bloodiest periods of its long civil war, guilty of genocide and crimes against humanity."
I think Sellers continues to influence Chester & Lancaster County Republican Party politics.


Posted by James Pitcherella at 3:32 PM No comments:

I just don’t want to see any more City Council members that see nothing wrong with dealing drugs.

But City Council President Patsy Ray defended Murray's reputation, going so far as to write the letter. The letter was part of a pre-sentencing investigation.

"I can confirm that (Murray) is a woman of great integrity, (and) is extremely dedicated to her family and neighbors ... I have not seen anything wrong with her behavior," Ray wrote in the Nov. 14, 2006, letter.

In the letter, Ray identified herself as a minister and councilwoman. Ray said she has known Murray for 15 years through the Home Gospel Mission.

How can that be? Could someone dealing drugs from their home be the same person calling the police to make sure her neighborhood was safe?

In addition to the dozens of Coatesville residents upset with Ray's actions, even a county assistant district attorney questioned the appropriateness of an elected official coming to the aid of a drug dealer.

Frei said that Murray "contributed to the demise" of Coatesville.”


Ray's support for drug dealer a concern for city


Posted by James Pitcherella at 1:52 PM No comments: