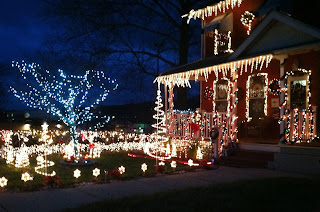 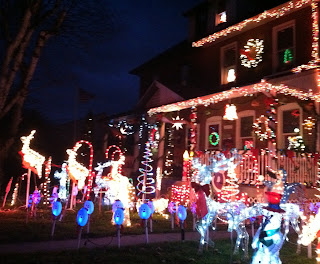 I'm sure there is a lot more. There's a short time window to photograph them, about sundown to 1/2 hour after sundown.
Posted by James Pitcherella at 6:30 PM No comments: Links to this post


That was British Prime Minister Neville Chamberlain when he got back from talking with the Germans, just before the Germans went to war with England. Chamberlain believed he was negotiating with reasonable people.

President Obama is just way too much like Neville Chamberlain to negotiate with Republicans. He needs to tap Richard Trumka as his primary negotiator. Richard Trumka knows what Republicans are made of. I like this ad:

A shift in posture, a sense of 'weakness'

Posted by James Pitcherella at 10:44 AM No comments: Links to this post

My Double Barrel Side by Side 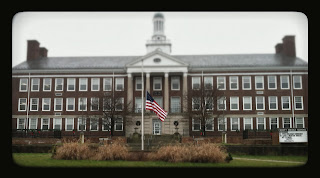 The photo is of Scott Middle School. The flag is at half-mast because our nation is in mourning. When I bought my first shotgun it was 1959 and this school was called Scott Senior High School.

My first shotgun was a side-by-side 12 gauge. I sanded the stock "raised the grain" and coated it with linseed oil. I think I learned how from an article in the National Rifle Association's "American Rifleman". I bought the shotgun used, as is. When I fired one barrel the action opened about an 1/8 inch and I needed to snap it shut to fire the next barrel. That took too long for a second shot so in practice it was a single shot gun.

Pheasants are the best tasting fowl. I went around Pennsylvania frightening pheasants for a few years. Now and then I brought something home to eat. Being outside in the crisp fall weather was most of the fun. Shooting gave me a reason to be there. I didn't relish the killing part but at some point the bird changed to something to eat.

I attempted deer hunting with a borrowed Winchester 94. Deer hunting as I know it required sitting still for long periods. After five minutes of immobility something would begin to itch.  Usually it was my nose. The itch would grow and grow until I gave in and scratched. The deer were saying "Check out the guy with the Winchester that can't sit still".

After President Nixon changed farming by not paying for fallow fields the pheasants disappeared and I stopped hunting.

Back in 1956 the "American Rifleman" was filled with articles on shooting, firearms safety, care of firearms and developing " Wildcat" special cartridges and rifles to fire them. There was very little Second Amendment stuff.

I don't hunt anymore. Maybe if I moved to Montana where my brother lives I might start again. He is disabled and shoots far away elk from the back of a pickup truck. I think I could do the same thing.

If I did hunt again I don't think I could be an NRA member.

Now a days being an NRA member is about the same as being a John Birch Society member. The NRA has become an extremist organization. I think it began to change after the Civil Rights Act, Nixon's "Southern Strategy" and all that. The NRA became an arm yourself to protect your daughters from the "black menace" organization. So the NRA is basically a racist organization.

I think it's time we begin to call the National Rifle Associate what it has become; a shill for racial hatred and ammunition manufacturers. Ignore the NRA and stop the killing.

Posted by James Pitcherella at 5:31 PM No comments: Links to this post

"27 KILLED IN CT ELEMENTARY SCHOOL:Lives Could have been Spared if Not for Ban on Staff Carrying Guns

Larry Pratt, executive director of Gun Owners of America, responded to the tragedy saying, "Gun control supporters have the blood of little children on their hands. Federal and state laws combined to insure that no teacher, no administrator, no adult had a gun at the Newtown school where the children were murdered. This tragedy underscores the urgency of getting rid of gun bans in school zones. The only thing accomplished by gun free zones is to insure that mass murderers can slay more before they are finally confronted by someone with a gun."

You might remember Pat Sellers for his “Referendum” designed to protect the “Saha Farm” from eminent domain and as a rigorous campaigner for the infamous “Bloc of Four” Coatesville City Council. Pat Sellers allegedly has a connection to Larry Pratt.
Larry Pratt is mentioned in "Land of the Paranoid" in today’s Washington Post:

“As much of the right sees it, the government is planning to incarcerate its enemies (see Beck and Erickson, above), socialize the economy and take away everyone's guns. At the fringe, we have figures like Larry Pratt, executive director of the Gun Owners of America,

Posted by James Pitcherella at 7:25 PM No comments: Links to this post

Republican Gladiators Fight to the Death

The Teabsggers understand the unpopularity of the things they do. Most a expect to be one term Congressmen. They want to destroy the Federal Government in that one term they have. It doesn't matter if they drown the Republican Party in that bathtub along with government.

Posted by James Pitcherella at 4:51 PM No comments: Links to this post