Some Coatesville residents think Walgreens will leave because of robberies

They were saying that even before the store was robbed.

Walgreens is here to stay.

I think that Walgreens factored in possible robberies when they planned to come here. I believe that they expected robberies. All they would have needed to do would be to speak with the storeowners they replaced and they would have known about a history of robberies.

Walgreens has one up on the previous stores they replaced. Walgreens hires local people. In a town like Coatesville where everyone knows everyone a robber from Coatesville would be recognized. That's allegedly exactly what happened last Friday April 20th.

The alleged robber was said to be a meth addict who was looking for drugs like Adderall. I believe that instead of enrolling himself in a detox program the poor guy may have made a huge change in his life by allegedly doing an armed robbery.

All drug stores are targets for robberies. That's why pharmacist is a high-risk occupation. It's just my opinion but I think the CVS near the Brandywine Hospital is a more likely robbery hot spot than any drugstore in Coatesville because it has easy entry and exit on highways.
Posted by James Pitcherella at 7:59 PM No comments: 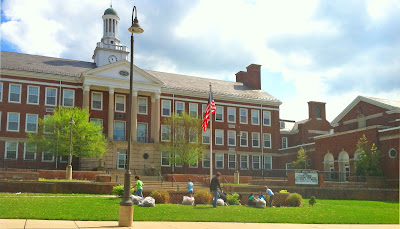 Students at Scott Middle School were doing a spring cleanup and planting on the school grounds today.

Posted by James Pitcherella at 4:38 PM No comments:

There was an armed robbery at the Walgreens at Lincoln Highway and 8th Avenue in Coatesville this afternoon.
A small amount of cash was allegedly stolen at gunpoint.
There were no injuries.


The robber of the pharmacy has allegedly been apprehended. He allegedly did steal some bottles of regulated drugs along with a small amount of cash.
Posted by James Pitcherella at 3:44 PM 2 comments:

Mr. Pinto was allegedly one of three or four individuals involved in a home invasion. One other person may have been shot and wounded.
Posted by James Pitcherella at 2:29 PM No comments:

Burglary near 13th Avenue and Lincoln Highway in Coatesville

There was a break in door burglary on Wednesday April 18th in Coatesville on Lincoln Highway near 13th Avenue.

The home was unoccupied at the time. There was a similar burglary in an unoccupied home in nearby West Bradford Township.
Posted by James Pitcherella at 1:29 PM No comments:

Courtyard Marriott Coatesville opening in May

There will be a Grand Opening of the Courtyard Marriott Hotel in Coatesville in May.

In case you were wondering about Jose Pinto

Jose Juarez Pinto has no criminal record; nothing that I can find.

Death spiral for the city business/boost for drug dealers

“In the short run, this costs the city some money, and we will probably have to tap into the trust fund,” Councilman Jarrell Brazzle said. “But in the long run, we are to save a lot of money from this.”
From:
Coatesville offers early retirement for police
By ERIC S. SMITH
esmith@dailylocal.com

OK, I know the officers involved in the "early retirement" are some of the same officers involved in the alleged goofy sex scandal thing. However if you cut back police and lose taxpaying residents it's a death spiral for the city. In the short run and the long run Coatesville will lose property owners that pay taxes. They will be leaving for a safer place to live. It has already started.

What will make a difference in the city budget as far as hiring police is a big Democratic across the board national win and a renewal of federal assistance to local police.

The immediate effect of losing police officers again is a boost for the drug selling business and the violent crime that goes with it.

The important stuff, the meaningful stuff for the City of Coatesville is happening at the Redevelopment Authority. I believe the City Council and City staff continue to screw the city with petty crap like firing the Finance Manager because she allegedly found that 2 city council members ran up large unpaid city trash bills. City Council meetings usually consist of scheduling public events and complaining about finances. The Redevelopment Authority is where important stuff happens.

Summer's coming. If you haven't already done so it's time to consider carrying a firearm in Coatesville.

Posted by James Pitcherella at 2:43 PM No comments:

" Government is at its core what we do together that we can't do alone." Tim O'Reilly

After several years of diminishing federal assistance municipal bureaucracy like the City of Coatesville's can use a little help from citizens.

Crowd sourcing apps can link neighbors and people inside and outside of government bureaucracy with answers to problems and get things done.


One crowd sourcing app is now in place in Coatesville, SeeClickFix. Things do get fixed.
See:

Some cities use apps to link to volunteer fireplug snow cleaners and volunteer snow sidewalk shovelers.

I would like to see an app that could help to fight violent crime. Maybe it would be two separate apps; one to find suspects and one to prevent violent crime from happening.

For instance, elderly and disabled people are justifiably afraid to walk in Coatesville alone. A "Walk Coatesville" app could link them with neighbors to walk together. It's just an idea, I don't know how it would work out. And I don't yet know how to write apps.


This is a study that in my view opens windows to possibilities for a crime prevention app:

Code for America Our Apps and Projects

Thanks to Matt Baker for sending me this video:

JENNIFER PAHLKA AT TED [VIDEO]
The video coding used on the Code For America post doesn't work on some devices so I used the You Tube version.
Posted by James Pitcherella at 12:23 PM No comments:

Here in Coatesville we may be laying off police from a police force that now has inadequate staffing. We could draw from other nearby departments as we did consistently during 2006/2010. The problem is that nearby departments and even the Pennsylvania State Police are also reducing their numbers. So if two serious incidents occur in separate areas of Coatesville one will go without police for a time.

Federal grants and other support for local and state police have been dried up by the Republican Party’s instance on cutting back police funding. And even if Democrats win by landslides all across the nation it will take several years to return local police back to an adequate level.

In other words we are stuck with inadequate policing for at least several years if the economy keeps on the recovery side and Democrats win. And that’s the best prognosis.

Once layoffs occur in Coatesville things like community policing, and detective work are gone. We will have a reactive force.

“The group of twenty advanced democracies—the major countries of the Organisation for Economic Co-operation and Development (OECD), including the United Kingdom, France, Germany, Japan, the Nordic countries, Canada, and others—can be thought of as our peer nations. Here’s what we see when we look at these countries. To our great shame, America now has:

• the highest poverty rate, both generally and for children;

• the greatest inequality of incomes; • the lowest social mobility;

• the lowest score on the UN’s index of “material well-being of children”;

• the largest prison population in absolute terms and per capita;

• the lowest score on Yale’s Environmental Performance Index (except for Belgium) and the largest ecological footprint per capita (except for Denmark);

• the lowest spending on international development and humanitarian assistance as a percentage of national income (except for Japan and Italy);

• the highest military spending both in total and as a percentage of GDP; and • the largest international arms sales.”

America the Possible: A Manifesto, Part I

From decline to rebirth

Published in the March/April 2012 issue of Orion magazine

If we legalized drugs beginning with marijuana we would cut back these three items of "national shame" that I believe also greatly imperil public safety:

• the largest prison population in absolute terms and per capita;


In order to maintain and improve public safety we must end Prohibition of drugs in the USA.
Posted by James Pitcherella at 3:54 PM No comments:

Some background as to why the Velodrome development plan didn’t go the first time.


"In December of 2010, the Redevelopment Authority and the project developers at that time were reportedly closing in on a deal to sell the land at the corner of Lincoln Highway and Route 82 known as the Flats. Since then, the window for an agreement of sale has been extended numerous times and there have been no signs of an agreement.However, in late 2011, new developers signed onto the project and the former developers left the group."

I'm following the SureInvestment "unauthorized collective investment scheme". It is in now in the High Court of Justice, Chancery Division, UK awaiting adjudication. I update when more information is available.

It is of interest to Chester County residents because Crosby Wood, who has an office in Coatesville, PA,  is a "principal of Sure" (SureInvestment, LLC See, "Before the National Futures Association, in the Matter of SureInvestment and Crosby Wood" below.

SureInvestment shut down
BY ANDREW PENMAN ON NOVEMBER 23, 2011 1:00 PM IN INVESTMENTS
Weymouth Securities Limited was shut down in the High Court today for running an unauthorised collective investment scheme.
The firm, run by 32-year-old Benjamin Wilson of Poole of Dorset and trading as SureInvestment, had been ordered to pay the Financial Services Authority £11million in three installments, but the first installment of £3.9 million was paid the late and others not at all.
More At Mirror.com UK  Opinion: