Terrance Farrell said an elderly White woman was to terrified of young Black students at Lincoln University campus to vote at Lincoln U. Since Farrell lives in Lower Oxford he was able to petition the court to change the polling place from Lincoln U to a tiny building between a busy highway and an active rail line.

The result was long lines of voters and the Lower Oxford Polling Place open to after 11:00 pm on Election Day 2008.

As a Chester County Commissioner, Kathi Cozzone has worked hard to protect voter's rights--just ask the Lincoln University students and residents assigned to the Lower Oxford East Precinct. Cozzone, one of three Chester County Commissioners and the lone Democrat, voted her conscience in September 2008 when the Board of Elections considered a petition signed by both local Democrats and Republicans to relocate the polling place from a smaller, inadequate facility to a previously used site in a gymnasium on the nearby Lincoln University campus. Listening to the concerns of her constituents, she voted in favor of the move because the proposed location was safer, more accessible, and overall better equipped to accommodate the 1,000+ voters who were expected to turn out in November. Cozzone explained her decision to the Daily Local:"I think that moving it to Lincoln University gives us the opportunity to provide a safe environment for the voters, to provide a timely environment for the voters and to get all the voters to vote."

However, Republican Commissioners Carol Aichele (now PA's current Secretary of the Commonwealth) and Terence Farrell both voted against the move for partisan reasons but cited flimsy excuses and exaggerated "concerns" about the relocation plan to justify denial of the petition.  There were 1,556 ballots cast at the Lower Oxford East polling place on Election Night 2008 --- over 500 more than initially projected. Wait times were from six to eight hours because there were only six voting booths, one ballot scanner and one restroom. In April 2009, there was a similar proposal and the Republican Commissioners collectively chose to ignore the legitimate concerns of the people while, once again, Commissioner Cozzone was the only dissenter. Subsequently, the County was sued (see English, et al. v. Chester County) because of the extremely long wait times and hazardous conditions at the polling place, and was settled in favor of the Plaintiffs, wasting thousands of tax dollars on a lawsuit that could have easily been prevented.

In an August 2010 Daily Local Article, Commissioner Cozzone remarked on the outcome of the case: "When all was said and done, the right resolution to the issue of Lower Oxford East's polling place was reached. The recent settlement will allow all the precinct's residents to vote in a location with good parking, plenty of space and a safe place to wait in line. While I am pleased with the settlement, I would be remiss if I did not point out that this outcome was available to the County before legal action was taken, and taxpayer money was spent."

Posted by James Pitcherella at 12:06 PM No comments:

Chester County Sheriff Welsh is a Leadership member of CSPOA. What happens here in Chester County PA if Trump is removed and militia groups retaliate?

"Trump also suggested that his impeachment would produce a second American Civil War. This language is a dog whistle to the deranged."  - Judge Andrew Napolitano FOX NEWS.


"The core philosophy of the Three Percenter movement, whose adherents have engaged in violence, is that citizens would be justified in taking up arms to violently overthrow the government if the government enacted stronger gun regulations," Media Matters recently noted."

"Trump has also admitted to accusing the as-yet publicly unnamed whistleblower of treason, and suggesting that the whistleblower and those who have helped him are spies and ought to be treated as spies were in "the old days" (Trump’s phrase) – that is, by hanging.

The president’s allusions to violence are palpably dangerous. They will give cover to crazies who crave violence, as other intemperate words of his have done. His words have already produced offers of "bounties" in return for outing and finding the whistleblower.

Trump also suggested that his impeachment would produce a second American Civil War. This language is a dog whistle to the deranged."


"Privately, the president had often talked about fortifying a border wall with a water-filled trench, stocked with snakes or alligators, prompting aides to seek a cost estimate. He wanted the wall electrified, with spikes on top that could pierce human flesh. After publicly suggesting that soldiers shoot migrants if they threw rocks, the president backed off when his staff told him that was illegal. But later in a meeting, aides recalled, he suggested that they shoot migrants in the legs to slow them down. That’s not allowed either, they told him." 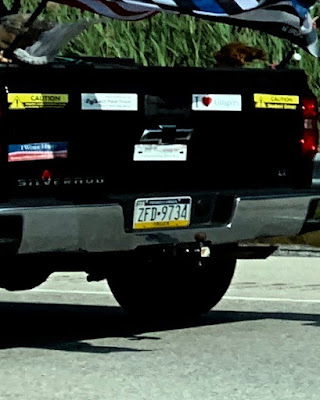 I got his plate.

My iPhone fired off 10 photos of the Nazi? guy in Black Chevy pickup with Nazi flags (flags appropriated by Nazis) & Hillary Clinton dummy at Rt 30 & Rt 100 the day after the El Paso shooting at Walmart. I didn't notice until today that one photo has his plates, Pennsylvania ZFD-9734


Bunny Welsh the Chester County Sheriff is a member of the Leadership of the CSPOA (Constitutional Sheriffs and Peace Officers Association).

Posted by James Pitcherella at 10:23 PM No comments:

Diplomats are National Security‘s first responders to threats to our nation from abroad. Our military is back up. Trump is gutting what Benjamin Franklin so courageously began.

A friend and co-worker’s brother was a career State Department officer. His wife and two boys followed him around the world.

On one overseas post he bought a home he lived with his wife & 2 boys in Kuala Lumpur. They lived there several years. The moment they returned home to Philadelphia they went to a deli and bought hogies.

He was in Beirut walking on the street with security. There was a traffic jam. A man behind a stopped car brandished a pistol and said move out of the way. The man in front produced an AK-47 & fired into the air. My friends brother, his last name is Cawley, was thrown to the ground by his security.

He got the best marshal arts trainer he could find to educate his sons. In many countries where they lived his entire family was under constant threat.

“Democrats and Republicans in Congress must act to protect the State Department and the Foreign Service from Mr. Trump’s overt attacks and implicit disregard. The House in its impeachment inquiry should reaffirm the need for the State Department to be in charge of our relations with foreign countries. It should also examine how private citizens like Mr. Giuliani may have encroached on or usurped those responsibilities. For its part, the Senate should demand that the president send for ambassadorial confirmation a substantially higher number of career officers.


Congress should also begin work on a bill to reauthorize the Foreign Service in its central mission, structure and responsibilities, which was last done in 1980. Given the changes in the global economy, technology and global balance of power — and in light of this president’s antagonistic relationship with the State Department — reaffirming and strengthening the role and mission of our career diplomats is a necessity.


The State Department is in crisis. Mr. Trump has done enormous harm to its mission and self-confidence. Republicans and Democrats in Congress must take steps to rescue an American institution that with proper support and presidential leadership, could help make America a great and respected global power once again.”

American Diplomats Are Being Persecuted by Their Own President

Posted by James Pitcherella at 4:12 PM No comments: