WHAT ABOUT SERVICEMASTER'S LEVEL OF SERVICE: 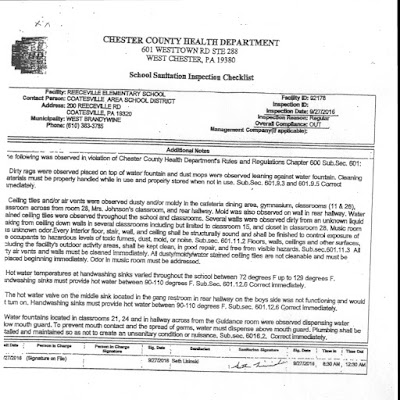 Several years ago the Bethel Park School District in Pennsylvania voted to contract with ServiceMaster, a $1.5 billion multinational corporation, to provide custodial and maintenance services to city schools. The School Board took this step because it believed it would save money. Within days, 25% of the district's unionized janitors got pink slips from the city, only to receive job offers from ServiceMaster to do the same work at half the wages. Service-Master cut other costs as well, including preventive maintenance on expensive city equipment. By the time the ServiceMaster contract was up for renewal, Bethel Park had discovered the real costs of contracting out: dirty schools, destroyed equipment, and low morale among poorly-paid workers. The school district dropped the contract, having learned the hard way that contracting with a profit-making corporation raises costs while weakening public control over service delivery.

In my post, AB469: Forced Privatization of School Services and Free Rent for New Businesses?,  I linked to a fact sheet (pdf) regarding privatization of services within public schools and why it’s not a good idea. ServiceMaster is referenced over and over again, noting the problems the schools had with that particular company:

Elwood Dixon is retired from the Coatesville School District. He was supervisor of the janitorial services at the Caln campus of CASH.

He told me he "knows where all the bodies are buried".

Elwood believes the school district did not bargain in good faith when they negotiated with Servicemaster.

The school district stated there is a law that says they can do that. After a person on a state senator's staff researched it, no such law could be found.

Elwood believes the janitors have grounds to re-negotiate their contract.

Servicemaster was hired several years ago to clean some schools in the Coatesville School District. They didn't last. There were complaints about dirty rooms and unpolished floors.  Elwood said a tractor went missing when Service Star left and that the Service Star supervisor smelled of alcohol.

Posted by James Pitcherella at 8:21 AM