In 2015 there was a question: What is it going to cost to have ServiceMaster come in?” WE NOW KNOW THAT IT’S $280,724.50, a 14 month contract. Are there kickbacks to individuals in the Coatesville Area School District?


The district is looking to outsource its custodial and groundskeeping services to Tennessee-based company, ServiceMaster. The proposed agreement with ServiceMaster would allow about 60 custodians and six groundskeepers to maintain their jobs in the district, at market wages, and to receive benefits including a 401K package, according to the district.


During the public comment section of the meeting, Sharon Ross questioned the validity of the savings that are expected to come from the district outsourcing its custodians. ‘I know you’re hoping that the custodial contract is not renewed, and that there will be outsourcing,’ she said to the board. ‘The question is: what is it going to cost to have ServiceMaster come in? What happens in following years when they increase their charges?”

The Coatesville Area School District assumes all but the administrative costs and salaries of Servicemaster employees: 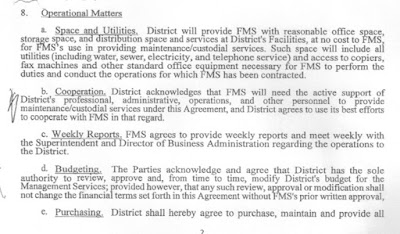 “Ron you highlighted the three areas that we looked at tonight and the forth area which is smaller but still the biggest one left, number 400 purchase property services. What is that?

Ok, if you recall back in January 10th i said the reason your salaries are declining but your costs of your 400 …are increasing is because of your services that we contracted through Service-master and DCA.(?)  Some of those employees are not being replaced and being replaced with contractor services…

“Several years ago the Bethel Park School District in Pennsylvania voted to contract with ServiceMaster, a $1.5 billion multinational corporation, to provide custodial and maintenance services to city schools. The School Board took this step because it believed it would save money. Within days, 25% of the district's unionized janitors got pink slips from the city, only to receive job offers from ServiceMaster to do the same work at half the wages. Service- Master cut other costs as well, including preventive maintenance on expensive city equipment.

By the time the ServiceMaster contract was up for renewal, Bethel Park had discovered the real costs of contracting out: dirty schools, destroyed equipment, and low morale among poorly-paid workers. The school district dropped the contract, having learned the hard way that contracting with a profit-making corporation raises costs while weakening public control over service delivery.”

Servicemaster employees receive a $1 increase in 2018-19

We don’t know what the current contract with Servicemaster is. It's difficult to obtain that information from the school district.