Who stole the people's money? 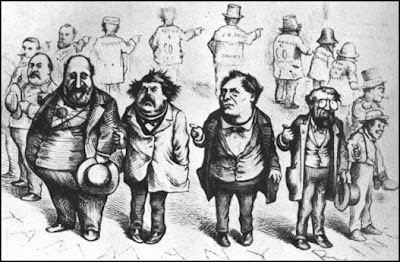 WHO STOLE THE PEOPLE'S MONEY?  T WAS HIM!

Is the Coatesville City Council setting up Mr. Rawlings to be the final resting place of the finger that points to "Who stole the people's money?

Coatesville council wrangles with finance director ordinance
Published: Wednesday, January 11, 2012
I think this excerpt from the Daily Local News article above holds the key words. I added bold italic to the key words:

"However, Rawlings argued the ordinance can hamper his authority. Solicitor John Carnes said one area that could hamstring Rawlings is a provision that allows the finance director to investigate any potential wrongdoings in the department."

As the legislation stands right now two people have control over the City of Coatesville’s finances, the city manager and the city finance director.
The proposed legislation, in my view, puts control of the city finances in one person, the city manager.
Right now there are checks and balances between the city manager and the city finance director. Some people might view the new legislation as a LICENSE FOR THE CITY MANAGER TO STEAL.
I don't believe the city council intended to arouse suspicions about any future dealings of Mr. Rawlings or any future Coatesville City Manager. I believe they did not think things  through.
This is why I believe some city council members are pushing to give the city manager total control of the city's finances:
The Coatesville City Council cannot very easily fire the Coatesville Finance Director. The City Council can fire the Coatesville City Manager. If some city council members have unpaid tax bills or are otherwise miss-behaving and the city manager finds out; he can keep quiet and keep his job or make it public and pack his bags.
I  think the new finance director ordinance was conjured up because the former fired Finance Director Stacy Bjorhus carefully did her job and working independently but in tandem with Manny Dechter, the forensic auditor suggested by then District Attorney Joe Carroll, found that $168,000 or $162,000 (I’m not sure which is correct) was missing from cash receipts that were collected at the City’s pay window.
See:
Is Stacy Bjorhus the Coatesville whistle blower being fired because she is a whistle blower?
And:

August 22, 2011, I asked “Is it true that Raj from the Finance Department didn’t show up to work today and that he is on his way to India?

Raj went off to India. I believe that for some reason people inside and outside of City of Coatesville government appear to be protecting the 2 individuals that still working at city hall that handled the cash receipts in 2008.
Mr. Dechter found that some Coatesville City Council members did not pay their trash collection bills.  Jarrell Brazzle received benefits as a part time City of Coatesville employee. Allegedly, he was not entitled to those benefits.

I believe all of this vitriol, rage and revenge of certain city council members concerning the former Coatesville Finance Director Stacy Bjorhus and the outing of certain Coatesville City Council members may be miss-directed.
Below is an excerpt from former Coatesville City Councilperson Karl Marking's blog. I again put what I think are important phrases in bold italic. Read it carefully. I don't believe Ms. Bjorhus publicly revealed the unpaid bills of city council members or the over payments to City Council member Jarrell Brazzle. I think it that information came from Manny Dechter. And that Karl Marking published it:
Yet to my knowledge, no one has been reprimanded, no one has offered repayment, and the only employee who seems to be chastised with any regularity in council meetings is the same person who raised the issue of payroll irregularities in the first place; Stacy Bjorhus, the current finance director. I find the details of Ms. Bjorhus’ detractors and supporters very interesting. The question I find myself asking is: Why would anyone have an issue with the person asking for supporting documentation when irregularities are discovered; especially when it is her job to do so? There’s only a handful of reasons I can think of."
FROM:

The person who audited records in the summer of 2010 was Manny Dechter. Mr. Dechter was allegedly fired by the Coatesville City Council members present in a heated argument when the unpaid bills of the city council members were discussed. I do not believe that he was entirely finished with the forensic audit. You might also ask  Mr. Dechter if he thinks that working in the Coatesville City Hall was a bruising experience.

Sorry guys but the stuff you are doing makes it easy to compare you to Tammany Hall.
The political cartoon is by the great cartoonist Tomas Nast from:

Posted by James Pitcherella at 10:00 AM