People call themselves Republicans but is there a Republican Party?

In 2009 the Koch Brothers created the “grass roots” Tea Party.

In 2012 the Koch Brothers created the GOP Voter Database they named Themis, after the Greek goddess who imposes divine order on human affairs.

"As Special Counsel Robert Mueller's team probes deeper into potential collusion between Trump officials and representatives of the Russian government, investigators are taking a closer look at political contributions made by U.S. citizens with close ties to Russia.

Fox News became the propaganda organ of the Republican Party "brainwashing viewers  and now in part directs an empty headed narcissistic psychopath President of the United "States who is easily swayed by flattery and calls himself “Republican” but would turn on a dime into a Democrat if the money was there for him. 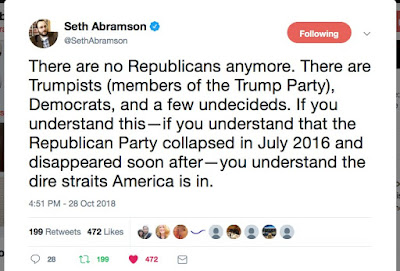 A loosely organized internationally funded organization directed by foreign & U.S. “investors”, hard right politicians, with propaganda by & at times, policy by Fox News, with a pathological narcissist president are now known as “The Republican Party.”

Posted by James Pitcherella at 7:05 PM