The Christmas display is in the right of way of ArcelorMittal and really should be moved. 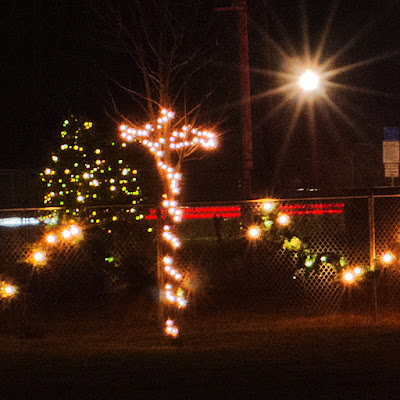 If so Merry Good Friday!

This is just a maybe violation of separation of church and state. But a crucifix Christmas display is at best crass.

It's nothing like the full blown church service we once had at Coatesville City Hall.

Call and response by Richard Legree in the first row saying "Amen".  Everything but the choir.

I think the political plan was that It's hard for some people to criticize a minister of Christ.

I was telling people and sending emails to people about the insane and allegedly illegal stuff going on at Coatesville City Council meetings but no one paid any attention. The Daily Local News ignored the crazy possibly illegal stuff. Most people said in a condescending manner that this stuff goes on in many local government meetings.

Posted by James Pitcherella at 12:04 AM