The .01 % will go softly or hard. James T. Hodgkinson is just the first. 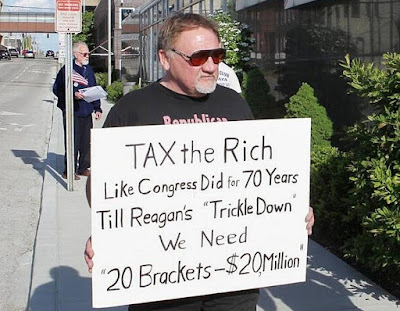 The photo says everything you need to know about James T. Hodgkinson.

"And so I have a message for my fellow filthy rich, for all of us who live in our gated bubble worlds: Wake up, people. It won’t last…

Here’s what I say to you: You’re living in a dream world. What everyone wants to believe is that when things reach a tipping point and go from being merely crappy for the masses to dangerous and socially destabilizing, that we’re somehow going to know about that shift ahead of time. Any student of history knows that’s not the way it happens. Revolutions, like bankruptcies, come gradually, and then suddenly. One day, somebody sets himself on fire, then thousands of people are in the streets, and before you know it, the country is burning. And then there’s no time for us to get to the airport and jump on our Gulfstream Vs and fly to New Zealand. That’s the way it always happens. If inequality keeps rising as it has been, eventually it will happen. We will not be able to predict when, and it will be terrible—for everybody. But especially for us..."

"The most ironic thing about rising inequality is how completely unnecessary and self-defeating it is. If we do something about it, if we adjust our policies in the way that, say, Franklin D. Roosevelt did during the Great Depression—so that we help the 99 percent and preempt the revolutionaries and crazies, the ones with the pitchforks—that will be the best thing possible for us rich folks, too. It’s not just that we’ll escape with our lives; it’s that we’ll most certainly get even richer.

The model for us rich guys here should be Henry Ford, who realized that all his autoworkers in Michigan weren’t only cheap labor to be exploited; they were consumers, too. Ford figured that if he raised their wages, to a then-exorbitant $5 a day, they’d be able to afford his Model Ts."


The Pitchforks Are Coming… For Us Plutocrats

"Rep. Mo Brooks (R-Ala.), who was one of about two dozen GOP lawmakers present when a gunman opened fire on their baseball practice early Wednesday, vigorously defended the Second Amendment after a reporter asked him if it changed his view on the “gun situation” in America.


So what part of ensuring we always have a republic did James T. Hodgkinson defend?


According to the NRA’s warped version of the 2nd. Amendment, Hodgkinson was defending the republic.

How would the Trump Administration respond to an attack on, with the exception of some Jersey mafia thugs, the only kind of people he has ever known? Keep in mind that Trump has a ready made police state waiting to be activated.

Mo Brooks might want to rethink what he said.

"Republicans used to be slightly better about hiding this from people but,.. I think that Trump's great challenge is that fundamentally he's an incredibly stupid person. So he and his merry band of miscreants struggle to hide their true intentions. In the same way that the Republicans that preceded him were able to do.


He was going to "make America great again" finally someone was going to drain the swamp and fight Wall Street and defend working people. You don't think that a trillion dollar tax cut for millionaires and billionaires that throws 20 million people off of health care. That's not draining the swamp?...

It's quite an astounding thing politically to run on a relatively populist platform and then to enact, or attempt to enact policies that clearly only benefit the richest people in society. People are creatures of emotion and I know that his supporters, his core supporters will do anything to maintain their emotional connection to him and their support of his polices irrespective of what the evidence suggests.

But eventually those feelings will collide with reality and a huge proportion of the 23 million people who are going to lose healthcare are Trump supporters. One has to believe eventually it will make them angry.


And the scary thing is that those folks started out angry. And our politics today is uncivil and unconstructive because so many people in the country are angry.


I think we've seen nothing yet. I think it's going to get much much worse."

Posted by James Pitcherella at 10:00 PM