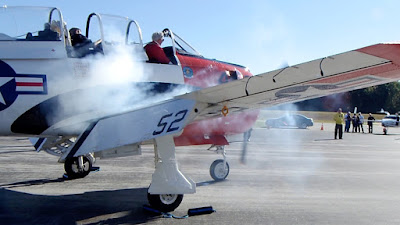 USS Lexington(CV/CVA/CVS/CVT/AVT-16), nicknamed "The Blue Ghost", is an Essex-classaircraft carrier built during World War II for the United States Navy. Originally intended to be named Cabot, word arrived during construction that the USS Lexington (CV-2) had been lost in the Battle of the Coral Sea. She was renamed while under construction to commemorate the earlier ship.[4] She was the fifth US Navy ship to bear the name in honor of the Revolutionary WarBattle of Lexington.

Lexington was commissioned in February 1943 and saw extensive service through the Pacific War. For much of her service, she acted as the flagship for Admiral Marc Mitscher, and led the Fast Carrier Task Force through their battles across the Pacific. She was the recipient of 11 battle stars and the Presidential Unit Citation. Following the war, Lexington was decommissioned, but was modernized and reactivated in the early 1950s, being reclassified as an attack carrier (CVA). Later, she was reclassified as an anti-submarine carrier (CVS). In her second career, she operated both in the Atlantic/Mediterranean and the Pacific, but spent most of her time, nearly 30 years, on the east coast as a training carrier (CVT).

Lexington was decommissioned in 1991, with an active service life longer than any other Essex-class ship. Following her decommissioning, she was donated for use as a museum ship in Corpus Christi, Texas. In 2003, Lexington was designated a National Historic Landmark. Though her surviving sister ships Yorktown, Intrepid, and Hornet carry lower hull numbers, Lexington was laid down and commissioned earlier, making Lexington the oldest remaining aircraft carrier in the world.


Posted by James Pitcherella at 1:22 AM